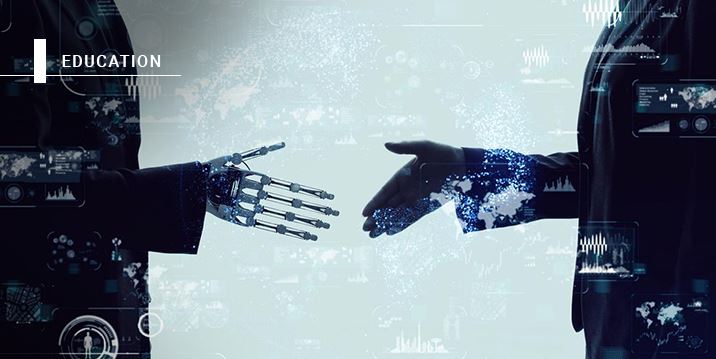 But this fourth industrial revolution – also known as the “intelligence revolution,” because it is being driven by AI and data – feels unprecedented in terms of the sheer pace of change. The crucial difference between this and the previous industrial revolutions is we’re no longer talking about generational change; we’re talking about enormous transformations that are going to take place within the next five, 10 or 20 years.

So what does this fourth industrial revolution mean for students, and the jobs that will be available to them once they enter the workforce? Here are the three biggest ways AI might fundamentally change the work of the future within a very short space of time.

Increasing automation is an obvious place to start since a common narrative surrounding AI is “robots are going to take all our jobs.” In many ways, this narrative is completely understandable – in a lot of industries and jobs, the impact of automation will be keenly felt.

To understand the impact of automation, PwC analysed more than 200,000 jobs in 29 countries and found:

These are stark figures. But there is a positive side to increasing automation. The same study found that, while automation will no doubt displace many existing jobs, it will also generate demand for new jobs. In fact, AI, robotics and automation could provide a potential $15 trillion boost to global GDP by 2030.

While automation will no doubt displace many existing jobs, it will also generate demand for new jobs.

This is borne out by previous industrial revolutions, which ultimately created more jobs than they displaced. Consider the rise of the internet as an example. Sure, the internet had a negative impact on some jobs (think booking flights and hotels online, instead of popping over to your local travel agent), but just look at how many jobs the internet has created, and how it’s enabled businesses to branch into new markets and reach new customers.

Automation will also lead to better jobs for humans. If we’re honest with ourselves, the tasks that are most likely to be automated by AI are not the tasks best suited to humans – or the tasks that humans should even want to do. Machines are great at automating the boring, mundane and repetitive stuff, leaving humans to focus on more creative, empathetic and interpersonal work. Which brings us to…

When parts of jobs are automated by machines, that frees up humans for work that is generally more creative and people-oriented, requiring skills such as problem-solving, empathy, listening, communication, interpretation and collaboration – all skills that humans are generally better at than machines. In other words, the jobs of the future will focus more and more on the human element and soft skills.

According to Deloitte, this will lead to new categories of work:

This emphasises how today's students will need to develop both the technical and softer human skills to succeed in the age of AI.

3. The employee experience will change, too

Even in seemingly non-tech companies (if there is such a thing in the future), the employee experience will change dramatically. For one thing, robots and cobots will have an increasing presence in many workplaces, particularly in manufacturing and warehousing environments.

But even in office environments, workers will have to get used to AI tools as “coworkers.” From how people are recruited, to how they learn and develop in the job, to their everyday working activities, AI technology and smart machines will play an increasingly prominent role in the average person’s working life. Just as we’ve all got used to tools like email, we’ll also get used to routinely using tools that monitor workflows and processes and make intelligent suggestions about how things could be done more efficiently. Tools will emerge to carry out more and more repetitive admin tasks, such as arranging meetings and managing a diary. And, very likely, new tools will monitor how employees are working and flag up when someone is having trouble with a task or not following procedures correctly.

On top of this, workforces will become decentralised (a trend likely to be accelerated by the coronavirus pandemic) – which means the workers of the future can choose to live anywhere, rather than going where the work is.

Preparing students for the AI revolution

AI, and particularly automation, is going to transform the way we work. So how can we make sure students are prepared to adapt? A big part of the process means moving away from textbook-focused learning and integrating AI and data into core curriculums, as well as creating new courses that enable students to be future ready. We should encourage students to embrace this new way of working, and we should all see the opportunities AI provides to make work better.

This article was written by Bernard Marr from Forbes and was legally licensed through the Industry Dive publisher network. Please direct all licensing questions to legal@industrydive.com.